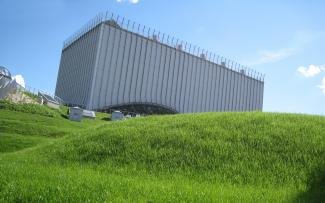 Sweeping lawns present the main building which in time will be encompassed in green. 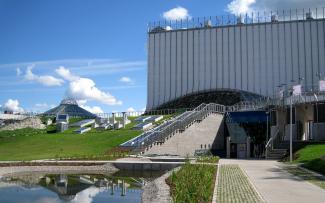 The pond landscape at the foot of the building com-plex is another attraction for people out walking. 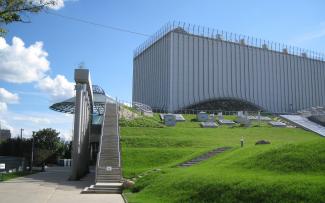 The many stairways enable the visitors to explore the world of the green roof. This journey begins where skylights can be seen, right in the middle of the lawn. 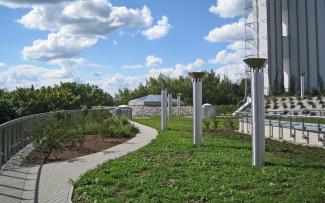 This green area is part of the extensive roof area that runs right around the main building. 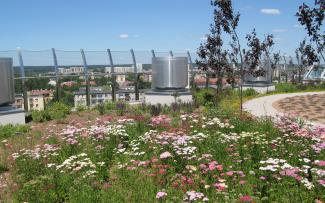 Yarrow is already creating a sea of blossoms, with many shades from white to pink. 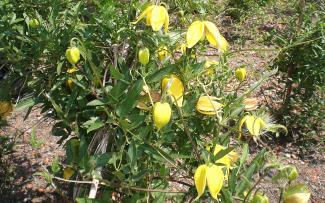 Yellow clematis is one of the climbing plants used to green the façade. 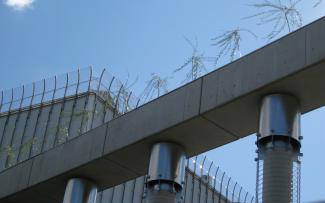 The many small green areas are fascinating: in this case, dwarf weeping willow planted in a row (Salix caprea pendula). 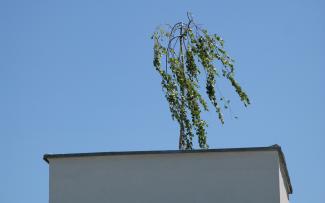 This weeping birch (Betula pendula) is growing atop the small roof of the lifts. 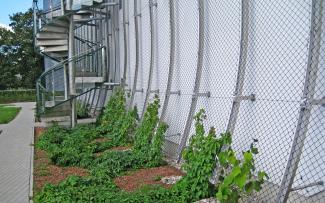 Off we go! The climbing plants have sufficient sup-port from the trellises attached to the wall. 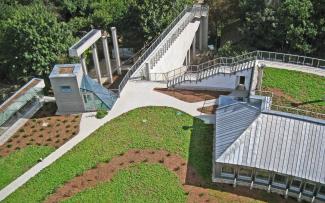 The view from the top shows the specific arrange-ment of pathways and grassy areas, the latter in turn divided to accommodate different plant sections.

The Polish city of Bialystok has a building that will take your breath away. The new Opera and Philharmonic Centre, European Centre for the Arts, with a built area of about 9,500 m², is the largest such building in the Eastern part of Europe. Bialystok is near the Belarusian border and about 180 km north-east of the capital, Warsaw. It has a population of just under 300,000 and is the regional capital of the Woiwodschaft (administrative district) Podlaskie. The new Opera and Philharmonic Centre received funding of over 100 million Euro from the EU Culture Programme 2007, which is about half of the total spend on this building programme. The EU programme is, therefore, promoting the common European culture area and fostering intercultural, international dialogue.

The Opera and Philharmonic Centre includes the main concert hall and the chamber concert hall – naturally with state-of-the-art audio-visual equipment. This venue can also be used for congresses, exhibitions, symposia and large conferences. The external appearance of the Opera and Philharmonic Centre is marked by surrounding green growth, which is gradually and inexorably encompassing the building. The works on the 5,000 m² roof were completed in 2010 and the overall building project is expected to be completed in 2011.

The programme is green

The building complex rises from the landscape, as it were, like a “green cube”, presented on the surrounding, and in part sloping, green roof areas – according to the vision of the Warsaw architects, Marek Budzyński, Zbigniew Badowski and Krystyna Ilmużyńska. The well-known architects Budzyński und Badowski have already left their green handprint on the new university library and the Supreme Court building in Warsaw. Each of these buildings is setting the trend for the future direction of green roof architecture, to which one more building has now been added. The high priority assigned to the green roof is due not only to the scope of architectural design but also to an increasing environmental awareness of sustainable building. The programme is green.

An essential factor in providing permanent green, and consequently real sustainability, is a properly-executed and functioning green technology. In the case of the Opera and Philharmonic Centre in Bialystok this is provided by the experienced system manufacturers, ZinCo GmbH. ZinCo services the Polish market through its partner GCL Sp. z o.o. (Green City Life) and therefore has its green roof experts on site as contacts both for the architects and the contractor companies. The landscape architect, Tomasz Chyliński was responsible for the detailed planning, and the landscape gardeners, Pleneria Sp. z o.o. Sp. Kom, for the execution of the green roof works for the Opera and Philharmonic Centre.

The tried-and-tested ZinCo system build-up “Heather with Lavender” for simple intensive green roofs provides the foundation for the diverse landscaped areas and surfaces across the various building levels. The core element in this green roof build-up are the Floradrain® FD 40-E drainage and water retention elements. The composition of mineral and organic components in the "Heather with Lavender" system substrate used here is created specifically for the selected vegetation. The substrate is 30 cm deep on average and about 45 cm where trees are to be planted. This ZinCo system build-up is also the perfect foundation for the pathways to be installed.

Visitors welcome – even on the roof

All roof areas are accessible to the public. A stairway on each side of the roof that slopes to the ground leads visitors to paved pathways, through beautifully designed green areas. Even the plateau on top of the cube-shaped main building is easily reached from outside by two winding staircases each of which is about 17 m in height. In addition, at various points a number of doors provide access from the building to all roof areas. The visitors can also take a lift up to the plateau.

Looking out from the plateau, a memorial to the famous Polish rockstar and composer, Czesław Niemen, to be erected in the near future, will be an eye-catcher, as is the wonderful view. A circular section with ground-covering thyme has been specially marked out for this monument. A pathway runs all around it, bordered by red-leaved cherry blossoms and apple blossoms (Prunus, Malus) that grow to a height of 6 m. Yarrow grows beneath the trees, already blossoming in all shades from white to pink.

In addition to plants with small root balls, the ZinCo seed mixture “Country colours” was used in a number of areas on the roof. This ready-to-sow seed mixture containing organic adhesive that fixes the seed to the surface is very handy, particularly for large-scale surfaces. The recommended amount to be spread is about 25 g/m². The “Country colours” mixture is in the category “extensive green roof”. On the other hand, areas with intensive green roofing (lawn, bushes, trees) require additional water during dry periods. This is provided by means of drip line irrigation.

An essential part of the landscape architectural concept is the greening of all vertical surfaces. Trellises have been attached to the façades of the towering cube-shaped main building, enabling climbing plants to creep upwards. In addition to evergreens, such as ivy, other plants such as virginia creeper and clematis, which lose their leaves in the autumn have been used. Japanese knotweed is also used as it is very popular as a creeper for large areas due to its extremely strong growth. These climbing plants all start out on the roof area and find suitable conditions there for ongoing plant growth. In this way, the architects’ vision of a green mantle for the Opera and Philharmonic Centre will become a reality over the years.

One striking thing about the garden design is the many small green areas. There are wall plants on top of the columns at the entrance that are themselves covered in growth: continuous rows of dwarf weeping willow. A solitary weeping birch crowns the small roof of the plateau lifts. A sea of green, no matter where you look.

Now that the greening works on the Opera and Philharmonic Centre are completed, it is only a matter of time until the vision of the Warsaw architects is fully realized. Green has been applied in incomparable diversity and variation and is now growing continuously. And, the public can witness this green abundance for themselves, as the roof areas are all accessible.

Construction project: Roof and façade greening of the Opera and Philharmonic Centre, European Centre for the Arts, 15-001 Bialystok, Poland