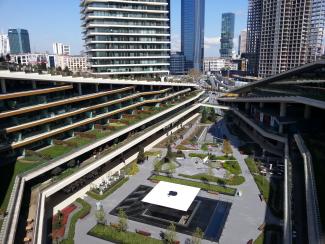 On around 108,000 ft² Istanbul gains a green square in the midst of the new shopping and leisure zone. 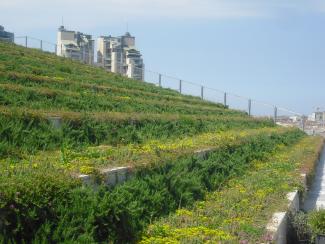 The 86,000 ft² roof of the performance hall is richly planted with Sedum, Delosperma and rosemary. 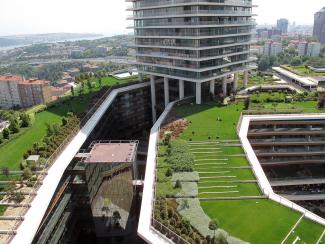 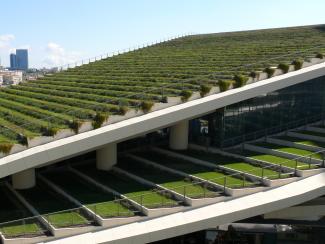 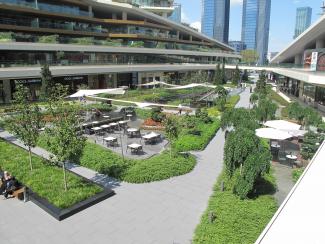 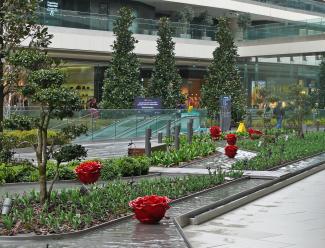 The underground parking deck and the Metro can be reached via escalators directly into the oasis landscape to the main square.

In the city of Istanbul, an interface between Europe and Asia, the Zorlu Center exemplifies the new modern environmental and socioeconomic spirit. It is the first mixed-use large-scale project in Turkey that fulfills five functions: culture and convention centre ("PAC" Performing Arts Center), luxury hotel "Raffles", shopping mall, extraordinary offices and exclusive living residences. The design is based on four distinctive towers arranged to form a ring, enclosing an approximately 108,000 ft² central plaza and a 130,000 ft² open-air park; this includes a five-story underground parking garage. A total 775,000 ft² of extensive and intensive roof gardens bring thriving nature and breathing, relaxing places into the architecture of superlatives.

With over 14 million people, Istanbul is one of the most densely populated cities in the world, located on a unique transition across the Bosphorus, the strait between the Mediterranean and the Black Seas. Rapid urbanization dominated Istanbul and requires new imaginative solutions in the use of space – not only in economic, but also in social and environmental considerations.

The Zorlu Center is the collaborative result of two award-winning architectural groups. Emre Arolat Architecture (EAA) and Tabanlıoğlu Architects won the "Zorlu Center Architecture and Urban Development Competition" in 2008 as a joint-venture amongst 117 other applicants. Owned by Zorlu Property Group, this iconic project was created over the years following the competition with a total investment of over $2.5 billion.

The landscape architecture at the Zorlu Center was completed by planning office DS Mimarlık, under the direction of Dr. Deniz Aslan. The heart of the endeavor was the creation of valuable human living space as well as compensation of green space in what has become, especially in crowded cities like Istanbul, an important marketing argument. The Zorlu Green Roofs filter dust and pollutants from the air and improve the microclimate. The Zorlu Center exhibits a stately 1,290,000 ft² of green area. Almost 60 % of the total area (around 775,000 ft²) is located on roofs, most noticeably on the topography of the 485,000 ft² large ring-formed green space which rises from ground level up to 108 ft in height. In the middle, a large main square of 108,000 ft² opens to the city and the Bosphorus. This area is also a roof area: underneath are the basements filled with the diverse attractions of the shopping mall, as well as the five-story underground car park and an underground pedestrian tunnel connecting the Zorlu Center to Metro and Metrobus public transit systems. During the construction of the entire complex around 4,000 people were involved. Only 33 architects, engineers and landscape designers and 350 employees were dedicated to the green areas. 15 people are now working to maintain the garden areas.

In the course of the project development, it became clear that Istanbul needs most of all a place for artistic and cultural events. The PAC Performing Arts Center thus became the key element of the Zorlu Center, with which the Zorlu Property Group put its social responsibility to the test. This culture and congress centre, with a capacity of 3,070 people, is itself a multifunctional masterpiece for theatre world premieres, musicals or high-profile concerts. An 86,000 ft² roof surface in steel structure spans the performance hall over a length of almost 263 ft. This construction was tailored to the Mediterranean climate with the ZinCo extensive Green Roof system build-up "Sedum Carpet" by the Turkish ZinCo partner company Onduline Avrasya A.S. The construction basis is, like on all rooftops, the presence of a root-resistant bituminous waterproofing. Over this, the Protection Mat SSM 45 was followed by 1 inch high Floradrain® FD 25-E Drainage and Water Storage Elements and the System Filter Sheet SF. The many different Sedum varieties as well as several typical flowering Mediterranean species like Rosemary and Delosperma grow in at least 4in of growing media. The design work of all green areas was the responsibility of the experienced horticultural company KARAOĞLU PEYZAJ MİMARLIK MÜH. TİC. LTD. ŞTİ.

Secure basis for all diversity

Whether Sedum or tree plantations, whether walking surfaces, seating areas or water elements, the entire spectrum of landscape architecture can be realized on roofs with the proper technology. For the gardens of the new main square, as well as all other intensive Green Roofs at Zorlu, the ZinCo system build-up "Roof Garden" was used. The core element here is the 1.6in drainage and water storage element Floradrain® FD 40-E. Like FD 25-E, it has an underside channel system so that excess water can safely flow into roof drains. Through full-surface application, drainage is secured under all flooring surfaces. The troughs on the upper-side of Floradrain® elements are in the case of FD 40-E correspondingly larger and store more water for the desired planting. It is followed by Filter Sheet SF and, in the areas designated for planting, a bed of growing media which was delivered in big bags or as bulk material. The growing media depth and mixtures vary per roof slope and desired planting. An average of approximately 14 to 16 inch of applied growing media depth is composed of a mix of organic and mineral materials poured over a mineral sub-layer.

Islands of greenery dominate the image of the main square, which is reminiscent of a large sun terrace. Here the element of water is also at home and light beams are reflected by a large central pool and a series of narrow extending waterways. And throughout the space a number of seating options invite visitors to relax and drink a coffee.

As previously mentioned, the Zorlu Center is also home to exclusive residences in panoramic locations, and their roof gardens in turn contain their own microcosm. The ZinCo system build-up with Floradrain® FD 40-E allows residents free design of their private gardens. Depending on the planting, growing media is heaped to about 8 inch in bed height. The larger shrubs that serve as demarcation between these gardens found space in troughs.

Also in the field of intensive greening, plant types characteristic of Istanbul and the Bosphorus can also be found on the Zorlu Center. These species are adapted to the Mediterranean climate and underline the same cultural references.

In total, there are over 200 different plant species, including 68 tree species. Over 500,000 perennials, 60,000 shrubs and 16,000 indoor plants were used. The height of the plants varies from about 12 to 35 inch, thus ensuring a rich structure. Tree species with shallow roots and a maximum height of 16 to 20 feet were chosen. The site location required specifically that the chosen plants be generally insensitive to wind. Due to wind suction, trees were fitted with special clamp and anchoring systems. Additionally there are large planters with a volume of up to 1,600 ft³ anchored into the steel structure of the building roofs. At the Zorlu Center grow a total of 3750 trees, including 2,500 evergreen and 1,250 deciduous trees. Finally, the facade itself is equipped with evergreen plants in troughs at many levels.

All roof gardens and green spaces on the ground floor have an automatic irrigation system. Rain water is stored in large greywater tanks and is made available to the plants via drip irrigation and sprinklers.

Equally, all the companies located in the extraordinary offices gain significant value because their employees find a nice working environment in the integrated green space, which increases their fun and productivity.

The green landscape architecture is also a marketing argument of the luxury hotel chain "Raffles". The hotel with its 181 rooms and suites offers its guests beautifully designed open spaces with swimming pools and the quintessential fantastic view of the Bosphorus from their lofty heights. In the heart of the city the Zorlu Center is a green oasis for all, which makes the location highly attractive. In Turkey, there is no comparable property in terms of scale and complexity. The Zorlu Center, which was incidentally also the venue of the 4th International Green Roof Congress in 2015, has won numerous architectural awards and represents a landmark of Istanbul in the 21st Century: timeless and exciting, unique and ecological, this is Zorlu Center at the crossroads of the European and Asian continents.